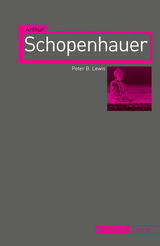 Philosopher Arthur Schopenhauer (1788–1860) is usually remembered for his pessimism. His most influential work, The World as Will and Representation, concluded that no human desires can ever be fully satisfied. But as Peter B. Lewis shows in this new critical biography, Schopenhauer in fact advocated ways—via artistic, moral, and ascetic forms of awareness—to overcome the frustration-filled and fundamentally painful human condition. Offering a concise introduction to the life and work of this German philosopher, Arthur Schopenhauer explores a man who devoted his life to articulating a philosophy that would benefit mankind by providing a solution to the riddle of human existence.

Lewis situates Schopenhauer’s principal doctrines of his philosophy into the context of his life, explaining how major events like his father’s apparent suicide led to his ideas on the meaning of life and the nature of art, religion, and morality. He also relates Schopenhauer’s thoughts to the intellectual and cultural world of early nineteenth-century Germany, where his philosophy was ignored for most of his life. Illustrated with images of Schopenhauer, his family, and his contemporaries, this book will engage anyone interested in music, literature, and the arts, as well as those who ponder the eternal questions of life’s meaning.
AUTHOR BIOGRAPHY
Peter B. Lewis is a former senior lecturer in philosophy at the University of Edinburgh and the editor of Wittgenstein, Aesthetics and Philosophy.
TABLE OF CONTENTS


Abbreviations
Introduction
1. The Sins of the Father
2. A High Mountain Road
3. Dr Schopenhauer
4. The Great Work
5. The Art of Genius
6. The Mystery of Compassion
7. The Sage of Frankfurt
8. ‘Posterity will erect monuments to me’
References
Bibliography
Acknowledgements
Photo Acknowledgements