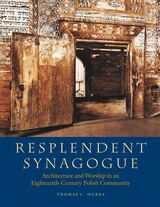 This unique exploration of a lost religious and cultural artifact breathes new life into a forgotten but fascinating aspect of eighteenth-century Polish Jewry.

Thomas C. Hubka, an architectural historian, immersed himself in medieval and early modern Jewish history, religion, and culture to prepare for this remarkable study of the eighteenth-century Polish synagogue in the town of Gwozdziec, now in present-day Ukraine. Because the Gwozdziec Synagogue, like so many others, was destroyed by the Nazis, this book revives a spiritual community lost to history. Hubka selected the Gwozdziec Synagogue because of the completeness of its photographic and historical records. Graced with nearly two hundred historical photographs, architectural drawings, maps, diagrams, and color illustrations, Resplendent Synagogue vividly recreates the spiritual heart of a once-vibrant Jewish population. Hubka demonstrates that while the architectural exterior of the synagogue was largely the product of non-Jewish, regional influences, the interior design and elaborate wall-paintings signified a distinctly Jewish art form. The collaboration of Jewish and Gentile builders, craftsmen, and artists in the creation of this magnificent wooden structure attests to an eighteenth-century period of relative prosperity and communal well-being for the Jews of Gwozdziec. Part of a tradition that was later abandoned by Eastern European Jewish communities in the nineteenth and twentieth centuries, this truly resplendent synagogue exemplified a high point in Jewish architectural art and religious painting.
AUTHOR BIOGRAPHY
Thomas C. Hubka is professor emeritus in the Department of Architecture and Urban Planning at the University of Wisconsin–Milwaukee. In 2006 he received the Vernacular Architecture Forum’s Henry Glassie Award in recognition of his lifetime of achievement. His most recent book is How the Working-Class Home Became Modern, 1900–1940.

REVIEWS
“Hubka’s book exhibits a fine blend of scholarship, accessibility, and panache. In fact, Hubka’s is the only book in the field of Jewish architecture that attempts to contextualize a building with such specificity and with such a broad sense of the way it belongs in its immediate and more extensive cultural surroundings. It is unique in using architecture to fill in details of the relatively undiscovered country of pre-Hasidic Eastern Europe. The extrapolations it invites are essential to understanding the period and place, making Hubka’s thesis a force to be reckoned with.”
— Marc M. Epstein, associate professor, Religion and Jewish studies, Vassar College

“Thomas Hubka has found an extraordinary new gateway back into a lost Jewish past. Through the meticulous analysis of a single wooden synagogue, he opens before us the nearly undocumented pre-Hasidic popular culture of Eastern European Jews.”
— Michael Steinlauf, associate professor of history, Gratz College