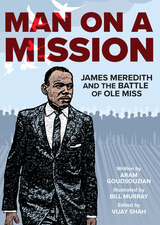 Man on a Mission: James Meredith and the Battle of Ole Miss
by Aram Goudsouzian
illustrated by Bill Murray
edited by Vijay Shah

In 1962, James Meredith famously desegregated the University of Mississippi (a.k.a. Ole Miss). As the first Black American admitted to the school, he demonstrated great courage amidst the subsequent political clashes and tragic violence. After President Kennedy summoned federal troops to help maintain order, the South—and America at large—would never be the same.

Man on a Mission depicts Meredith’s relentless pursuit of justice, beginning with his childhood in rural Mississippi and culminating with the confrontation at Ole Miss. A blend of historical research and creative inspiration, this graphic history tells Meredith’s dramatic story in his own singular voice.

From the dawn of the modern civil rights movement, Meredith has offered a unique perspective on democracy, racial equality, and the meaning of America. Man on a Mission presents his captivating saga for a new generation in the era of Black Lives Matter.

AUTHOR BIOGRAPHY
Aram Goudsouzian is the Bizot Family Professor of History at the University of Memphis and the author of several books, including Down to the Crossroads: Civil Rights, Black Power, and the Meredith March Against Fear.

Bill Murray has, over a long career, illustrated many editorial cartoons and several nationally syndicated comic strips. His work has appeared in the Saturday Evening Post, Ebony, Jet, Reader’s Digest, the Chicago Defender, and USA Today. He also creates the weekly strip Sonny Boy for the New Pittsburgh Courier.

Vijay Shah, an independent scholar, has worked in publishing for many years.


“The story of James Meredith and the integration of the University of Mississippi is often cast as a satisfying morality tale. Meredith’s narrative has even been distilled into four words: ‘courage, knowledge, opportunity and perseverance.’ Man on a Mission seeks to expand the way we see Meredith and his long fight against the forces of white supremacy, making the story into one that is harder to simplify. Aram Goudsouzian’s text and Bill Murray’s illustrations allow the reader to engage with the complicated and contradictory pieces of this important piece of history, allowing us to engage with the past and to see the issues from the past still mirrored in the present.”
—W. Ralph Eubanks, author of A Place Like Mississippi

TABLE OF CONTENTS
Contents
Preface
Introduction
1. Mississippi and Me
2. The Legal Challenge
3. The Battle of Ole Miss
4. The Price of Citizenship
5. The Most Segregated Man in the World
6. Our People’s Fight
7. My Own Way
Epilogue
Discussion Questions
The Making of Man on a Mission
Bibliography
REQUEST ACCESSIBLE FILE