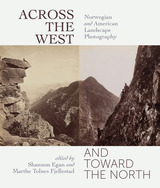 Across the West and Toward the North compares how photographers in Norway and the United States represented the environment in the nineteenth and early twentieth centuries, when once-remote wildernesses were first surveyed, developed, and photographed. Making images while traversing almost inaccessible terrain—often on foot and for months at a time—photographers created a compelling visual language that came to symbolize each nation.

In this edited volume, Norwegian and American scholars offer the first study of the striking parallels in the production, distribution, and reception of these modern expressions of landscape and nationhood. In recognizing how landscape photographs were made meaningful to international audiences—such as tourists, visitors to world’s fairs, scientists, politicians, and immigrants—the authors challenge notions of American exceptionalism and singularly nationalistic histories.

Shannon Egan is director of the Schmucker Art Gallery at Gettysburg College and the cofounder and codirector of the art gallery Ejecta Projects. She has authored articles on photographers Edward S. Curtis and Jeff Wall, and co-authored the artbook Ejecta.

Marthe Tolnes Fjellestad is the curator at Perspektivet Museum, Tromsø. She is coauthor of Starman—Sophus Tromholt Photographs 1882–1883, and coeditor of Library and Information Studies for Arctic Social Sciences and Humanities.

REVIEWS
“Across the West and Toward the North examines how Norwegian and American photographers pictured the landscape in a period of earthshaking technological transformation and expanding infrastructure. Shared artistic strategies are revealed through this smart cross-cultural study, which challenges entrenched notions that nationalism was uniquely expressed and understood in the landscape photography of each country. This book anticipates growing transna­tional scholarship resulting from the bicentennial commemoration of Norwegian immigration to North America in 2025.”
—Leslie Ann Anderson, Director of Collections, Exhibitions, and Programs, National Nordic Museum


“Egan and Fjellestad's edited volume is a timely contribution to the history of photography that examines the shared, transnational impulses in white, predominantly male, Norwegian and U.S. photographic landscape representations and practices in a period of intrusive and often violent transformation of existing social-natural environments in both geographies.”
—Ingeborg Høvik, associate professor of art history, The Arctic University of Norway