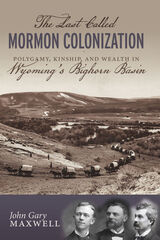 More than three hundred Latter-day Saint settlements were founded by LDS Church President Brigham Young. Colonization—often outside of Utah—continued under the next three LDS Church presidents, fueled by Utah’s overpopulation relative to its arable, productive land. In this book, John Gary Maxwell takes a detailed look at the Bighorn Basin colonization of 1900–1901, placing it in the political and socioeconomic climate of the time while examining whether the move to this out-of-the-way frontier was motivated in part by the desire to practice polygamy unnoticed.

The LDS Church officially abandoned polygamy in 1890, but evidence that the practice was still tolerated (if not officially sanctioned) by the church circulated widely, resulting in intense investigations by the U.S. Senate. In 1896 Abraham Owen Woodruff, a rising star in LDS leadership and an ardent believer in polygamy, was appointed to head the LDS Colonization Company. Maxwell explores whether under Woodruff’s leadership the Bighorn Basin colony was intended as a means to insure the secret survival of polygamy and if his untimely death in 1904, together with the excommunication of two equally dedicated proponents of polygamy—Apostles John Whitaker Taylor and Matthias Foss Cowley—led to its collapse.

Maxwell also details how Mormon settlers in Wyoming struggled with finance, irrigation, and farming and how they brought the same violence to indigenous peoples over land and other rights as did non-Mormons.

The 1900 Bighorn Basin colonization provides an early twentieth-century example of a Mormon syndicate operating at the intersection of religious conformity, polygamy, nepotism, kinship, corporate business ventures, wealth, and high priesthood status. Maxwell offers evidence that although in many ways the Bighorn Basin colonization failed, Owen Woodruff’s prophecy remains unbroken: “No year will ever pass, from now until the coming of the Savior, when children will not be born in plural marriage.”
AUTHOR BIOGRAPHY
John Gary Maxwell is the author of several books, including the Civil War Years in Utah: The Kingdom of God and the Territory That Did Not Fight, and Rob­ert Newton Baskin and the Making of Modern Utah. A retired professor of sur­gery at the University of Utah and University of North Carolina, Chapel Hill, he now lives in Wilmington, NC. His Scottish ancestors emigrated to Utah with the 1856 Second Handcart Company. Several were called in 1900 to col­onize the Bighorn Basin.
REVIEWS

“John Gary Maxwell gives us a case study of a Mormon colonization scheme in its rich cultural, environmental, and political contexts. His account of the settling of the Bighorn Basin gives us a close look at the challenges of earning a living in the arid West and the realities of post-Manifesto polygamy.”
—Jeff Nichols, professor of history, Westminster College

“Exhaustively researched, full of fascinating detail, this book tells the story of the LDS church’s last ‘colony mission.’ Maxwell recounts the enormous difficulties of this mission, and the book is also an important record of post-Manifesto polygamy. An illuminating, very readable account of Mormonism’s last colony and of the final conflicted years of LDS polygamy.”
—Todd Compton, author of A Frontier Life: Jacob Hamblin, Explorer and Indian Missionary


“John Gary Maxwell offers profound insight into the complexities of the Mormon Church’s efforts to preserve the practice of plural marriage through homesteading projects outside of Utah. His intriguing, well-researched history of the Big Horn Colonization Company blends dynamic historical figures, including the relatively unknown settler John D. Woodruff and the famed Buffalo Bill Cody, with the political controversy surrounding polygamy and the tremendous challenges of homesteading in one of the last frontiers of the American West.”
—Jeremy Johnston, Hal and Naoma Tate Endowed Chair and Curator of Western History, Buffalo Bill Center of the West

TABLE OF CONTENTS
Contents
List of Figures, Maps, and Tables
Acknowledgments
Preface
Introduction
1. A Primer on Latter-day Saint Polygamy
2. Idealists Among the Pragmatists
3. The Big Horn Basin as Frontier
4. Dispossession and Elimination
5. Penury, Depression, and Overpopulation
6. Five Woodruff Men
7. Whether Called or Volunteered, Plans and Progress Follow
8. Treks, Trials, and Finances
9. Promises and Accomplishments
10. An Innocent in the Big Horn Basin?
11. Polygamy Among the Colonists and Its Residue
12. A Platform for Polygamy’s Survival
Chronology
Notes
Bibliography
Index
REQUEST ACCESSIBLE FILE