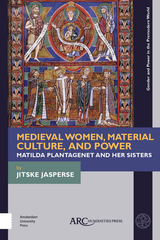 BUY
Medieval Women, Material Culture, and Power: Matilda Plantagenet and her Sisters
by Jitske Jasperse
Arc Humanities Press, 2020
Cloth: 978-1-64189-145-5
Paper: 978-1-64189-460-9
eISBN: 978-1-64189-146-2
This book argues that the impressive range of belongings that can be connected to Duchess Matilda Plantagenet—textiles, illuminated manuscripts, coins, chronicles, charters, and literary texts—allows us to perceive elite women’s performance of power, even when they are largely absent from the official documentary record. It is especially through the visual record of material culture that we can hear female voices, allowing us to forge an alternative way toward rethinking assumptions about power for sparsely-documented elite women.
TABLE OF CONTENTS