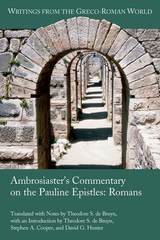 The ancient writer dubbed Ambrosiaster was a pioneer in the revival of interest in the Pauline Epistles in the later fourth century. He was read by Latin writers, including Pelagius and Augustine, and his writings, passed on pseudonymously, had a long afterlife in the biblical commentaries, theological treatises, and canonical literature of the medieval and the early modern periods. In addition to his importance as an interpreter of scripture, Ambrosiaster provides unique perspectives on many facets of Christian life in Rome, from the emergence of clerical celibacy to the development of liturgical practices to the subordination of women.

Theodore S. de Bruyn is Associate Professor in the Department of Classics and Religious Studies in the University of Ottawa, Canada. He is the translator of Pelagius’s Commentary on St Paul’s Epistle to the Romans (Oxford University Press, 1993) and the author of Making Amulets Christian: Artefacts, Scribes, and Contexts (Oxford University Press, 2017). He is currently President of the International Association of Patristic Studies.

Stephen A. Cooper is Professor in the Department of Religious Studies at Franklin & Marshall College in Lancaster, Pennsylvania. He is the translator of Marius Victorinus’ Commentary on Galatians (Oxford University Press, 2005) and author of Metaphysics and Morals in Marius Victorinus’ Commentary on the Letter to the Ephesians, which includes a translation of the commentary (Lang, 1995). He has also published on Augustine and Tertullian.