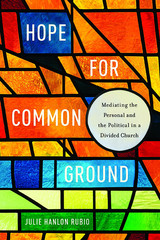 Much like the rest of the country, American Catholics are politically divided, perhaps more so now than at any point in their history. In this learned but accessible work for scholars, students, and religious and lay readers, ethicist Julie Hanlon Rubio suggests that there is a way beyond red versus blue for orthodox and progressive Catholics. In a call for believers on both sides of the liberal-conservative divide to put aside labels and rhetoric, Rubio, a leading scholar in marriage and family for more than twenty years, demonstrates that common ground does exist in the local sphere between the personal and the political.

In Hope for Common Ground, Rubio draws on Catholic Social Thought to explore ways to bring Catholics together. Despite their differences, Catholics across the political spectrum can share responsibility for social sin and work within communities to contribute to social progress. Rubio expands this common space into in-depth discussions on family fragility, poverty, abortion, and end-of-life care. These four issues, though divisive, are part of a seamless worldview that holds all human life as sacred. Rubio argues that if those on different sides focus on what can be done to solve social problems in “the space between” or local communities, opposing sides will see they are not so far apart as they think. The common ground thus created can then lead to far-reaching progress on even the most divisive issues—and help quiet the discord tearing apart the Church.

Julie Hanlon Rubio is a professor of Christian ethics at St. Louis University. She is the author of Family Ethics: Practices for Christians (GUP 2010) and A Christian Theology of Marriage and Family, and coeditor of Readings in Moral Theology No. 15: Marriage.