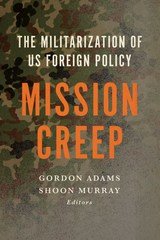 Mission Creep: The Militarization of US Foreign Policy? examines the question of whether the US Department of Defense (DOD) has assumed too large a role in influencing and implementing US foreign policy. After the Cold War, and accelerating after September 11, the United States has drawn upon the enormous resources of DOD in adjusting to the new global environment and challenges arising from terrorism, Islamic radicalism, insurgencies, ethnic conflicts, and failed states.

Contributors investigate and provide different perspectives on the extent to which military leaders and DOD have increased their influence and involvement in areas such as foreign aid, development, diplomacy, policy debates, and covert operations. These developments are set in historical and institutional context, as contributors explore the various causes for this institutional imbalance. The book concludes that there has been a militarization of US foreign policy while it explores the institutional and political causes and their implications.

“Militarization” as it is used in this book does not mean that generals directly challenge civilian control over policy; rather it entails a subtle phenomenon wherein the military increasingly becomes the primary actor and face of US policy abroad. Mission Creep’s assessment and policy recommendations about how to rebalance the role of civilian agencies in foreign policy decision making and implementation will interest scholars and students of US foreign policy, defense policy, and security studies, as well as policy practitioners interested in the limits and extents of militarization.

Gordon Adams is a professor at American University's School of International Service. From 1993 to 1997, he was associate director for national security and international affairs at the Office of Management and Budget. His publications include the coauthored Buying National Security.

Shoon Murray is an associate professor at American University's School of International Service and director of their US Foreign Policy and National Security master's degree program. She is the author of Anchors against Change.