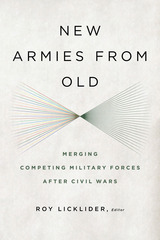 Negotiating a peaceful end to civil wars, which often includes an attempt to bring together former rival military or insurgent factions into a new national army, has been a frequent goal of conflict resolution practitioners since the Cold War. In practice, however, very little is known about what works, and what doesn’t work, in bringing together former opponents to build a lasting peace.

Contributors to this volume assess why some civil wars result in successful military integration while others dissolve into further strife, factionalism, and even renewed civil war. Eleven cases are studied in detail—Sudan, Zimbabwe, Lebanon, Rwanda, the Philippines, South Africa, Mozambique, Bosnia-Herzegovina, Sierra Leone, Democratic Republic of the Congo, and Burundi—while other chapters compare military integration with corporate mergers and discuss some of the hidden costs and risks of merging military forces. New Armies from Old fills a serious gap in our understanding of civil wars, their possible resolution, and how to promote lasting peace, and will be of interest to scholars and students of conflict resolution, international affairs, and peace and security studies.

Roy Licklider is professor of political science at Rutgers University and an adjunct research scholar at the Saltzman Institute of War and Peace Studies at Columbia University.

Part III: International Involvement9. Half-Brewed: The Lukewarm Results of Creating an Integrated Military in the Democratic Republic of the Congo Judith Verweijen10. Merging Militaries: Mozambique Andrea Bartoli and Martha Mutisi11. Bosnia-Herzegovina: From Three Armies to One Rohan Maxwell12. Bringing the Good, the Bad and the Ugly into the Peace Fold: The Republic of Sierra Leone Armed Forces after the Lomé Peace Agreement Mimmi Söderberg Kovacs13. Burundi Cyrus Samii