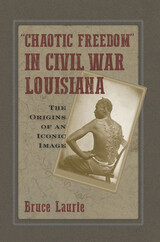 "Chaotic Freedom" in Civil War Louisiana: The Origins of an Iconic Image
by Bruce Laurie
University of Massachusetts Press, 2021
Paper: 978-1-62534-632-2
The image is terrible and familiar. A man sits, his face in profile, his torso exposed. His back is a breathtaking mass of scars, crisscrossing his body and baring the brutality of American slavery. Reproduced as a carte de visite, the image circulated widely throughout abolitionist networks and was featured in Harper's Weekly. Its undeniable power testified to the evils of slavery. But who was this man and how did this image come to be?

Bruce Laurie uncovers the people and events that created this seminal image, telling the tale of three men, two Yankee soldiers from western Massachusetts who were serving the Union Army in Louisiana and a man named Peter whose scarred back horrified all who saw it. The two soldiers were so shocked by what had been done to Peter, they sought to capture the image and document slavery's cruelty, the likes of which was all too common among those fleeing bondage in Louisiana. Meticulously researched and briskly told, this short volume unearths the story behind an iconic image.
AUTHOR BIOGRAPHY
BRUCE LAURIE is professor emeritus of history at the University of Massachusetts Amherst and author of Rebels in Paradise: Sketches of Northampton Abolitionists.
REVIEWS
"As painful and uncomfortable as Peter's image was to view, it allowed a mass audience to experience . . . the evils of slavery in a way that even the most potent words of abolitionists William Lloyd Garrison or Harriet Beecher Stowe ever could."—Christopher Klein, Boston Globe

"'Chaotic Freedom' in Civil War Louisiana makes an important contribution to the history of Civil War photography by providing new insight into the production of the image commonly known as The Scourged Back . . . [C]ompelling."—Civil War History
— -