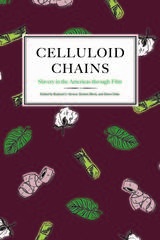 Featuring a variety of disciplinary perspectives and analytical approaches, Celluloid Chains is the most comprehensive volume to date on films about slavery. This collection examines works from not only the United States but elsewhere in the Americas, and it attests to slavery’s continuing importance as a source of immense fascination for filmmakers and their audiences.

Each of the book’s fifteen original essays focuses on a particular film that directly treats the enslavement of Africans and their descendants in the New World. Beginning with an essay on the Cuban film El otro Francisco (1975), Sergio Giral’s reworking of a nineteenth-century abolitionist novel, the book proceeds to examine such works as the landmark miniseries Roots (1977), which sparked intense controversy over its authenticity; Werner Herzog’s Cobra Verde (1987), which raises questions about what constitutes a slavery film; Guy Deslauriers’s Passage du milieu (1999), a documentary-style reconstruction of what Africans experienced during the Middle Passage; and Steve McQueen’s Oscar-winning 12 Years a Slave (2013), which embodies the tensions between faithfully adapting a nineteenth-century slave narrative and bending it for modern purposes.

Films about slavery have shown a special power to portray the worst and best of humanity, and Celluloid Chains is an essential guide to this important genre.

RUDYARD J. ALCOCER holds the Forrest and Patsy Shumway Chair of Excellence in the Department of Foreign Languages and Literatures at the University of Tennessee, Knoxville. He is the author of Time Travel in the Latin American and Caribbean Imagination: Re-reading History.

KRISTEN BLOCK is an associate professor of history at the University of Tennessee, Knoxville. She is the author of Ordinary Lives in the Early Caribbean: Religion, Colonial Competition, and the Politics of Profit.

DAWN DUKE is an associate professor of Spanish and Portuguese at the University of Tennessee, Knoxville. She is the author of Literary Passion, Ideological Commitment: Toward a Legacy of Afro-Cuban and Afro-Brazilian Women Writers.

REVIEWS
“Celluloid Chains treats the topic of (re)presenting slavery more completely than any text previously published on the subject.”—Seretha D. Williams, coeditor of Afterimages of Slavery: Essays on Appearances in Recent American Films, Literature, Television, and Other Media
— -