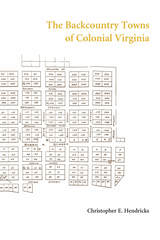 For decades historians and historical geographers have neglected the study of town life in the colonial South, simply portraying towns as the result of increasing population density. The Backcountry Towns of Colonial Virginia, the first comprehensive study of town development in the interior of the colonial South, marshals evidence that planned urban settlements were the essential agents in accelerating westward expansion.Through the analysis of twenty-five attempts to create towns in the Virginia backcountry, the work demonstrates there was a distinctly southern urbanmovement in the colonial period. It explores the factors that lead to the success or failure of a community and examines how each backcountry region operated as an economic unit uniquely suited to its development. Towns opened up land, attracting people to move into new areas or participate in new business opportunities. They furthered settlement, influenced immigration, created family and socialnetworks, and fostered the development of trade and systems of credit. The actions of a few individuals and groups of people resulted in the rapid occupation, settlement, and development of the Virginia backcountry through the consciouscreation of economic and social forces.The most complete study of southern towns since John Reps’s Tidewater Towns, The Backcountry Towns of Colonial Virginia offers a new understanding of property ownership, burgeoning trade, and immigration factors–the very elements of urban centers–in backcountry Virginia.
TABLE OF CONTENTS