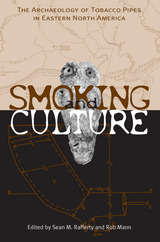 Smoking has played an important role in the cultures of North America since ancient times. Because of the ceremonial and ritual aspects of the practice in Native American societies, smoking pipes are important cultural artifacts. The essays in The Culture of Smoking constitute the first sustained interpretive study of smoking pipes, focusing on the cultural significance of smoking both before and after European contact.

Pipes lend themselves to anthropological as well as archaeological analysis in part because they are more ceremonial than utilitarian. Thus, while their styles and provenance can reveal something about trade relationships, cultural transfer, and aesthetic influences, they also provide important information about the nature of ritual in a particular society. As the contributors demonstrate, pipes offer a window through which to view the symbolic, ideological, and political roles that smoking has played in North American societies from prehistoric times to the nineteenth century.

The eleven essays included range widely over time and region, beginning with a case study of pipes and mortuary practices in the Ohio Valley during the Early Woodland Period. Subsequent chapters examine stone pipes from coastal North Carolina during the Late Woodland Period and the role pipes played in interregional interaction among protohistoric Native American groups in the Midwest and Northeast. Other essays explore the variety of cultural and political uses of pipes during the period of European contact. The final section of the book focuses on smoking in Euro-American contexts of the seventeenth through nineteenth centuries.

The innovative interpretive approaches taken by the contributors and the broad historical perspective will make The Culture of Smoking a model for examining other categories of material culture, and the volume will be welcomed by anthropologists and historians as well as archaeologists.

Sean M. Rafferty is associate professor of anthropology at the University at Albany, State University of New York.

Rob Mann is the southeast regional archaeologist for Louisiana and is based in the Museum of Natural Science at Louisiana State University.

AUTHOR BIOGRAPHY
Sean M. Rafferty is associate professor of anthropology at the University at Albany, State University of New York.

Rob Mann is the southeast regional archaeologist for Louisiana and is based in the Museum of Natural Science at Louisiana State University.