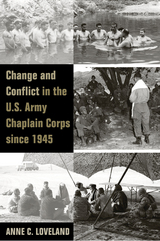 Army chaplains have long played an integral part in America’s armed forces. In addition
to conducting chapel activities on military installations and providing moral and spiritual
support on the battlefield, they conduct memorial services for fallen soldiers, minister
to survivors, offer counsel on everything from troubled marriages to military bureaucracy,
and serve as families’ points of contact for wounded or deceased soldiers—all while
risking the dangers of combat alongside their troops. In this thoughtful study, Anne C.
Loveland examines the role of the army chaplain since World War II, revealing how the
corps has evolved in the wake of cultural and religious upheaval in American society and
momentous changes in U.S. strategic relations, warfare, and weaponry.

From 1945 to the present, Loveland shows, army chaplains faced several crises that
reshaped their roles over time. She chronicles the chaplains’ initiation of the Character
Guidance program as a remedy for the soaring rate of venereal disease among soldiers in
occupied Europe and Japan after World War II, as well as chaplains’ response to the challenge
of increasing secularism and religious pluralism during the “culture wars” of the
Vietnam Era.“Religious accommodation,” evangelism and proselytizing, public prayer,
and “spiritual fitness”provoked heated controversy among chaplains as well as civilians in
the ensuing decades. Then, early in the twenty-first century, chaplains themselves experienced
two crisis situations: one the result of the Vietnam-era antichaplain critique, the
other a consequence of increasing religious pluralism, secularization, and sectarianism
within the Chaplain Corps, as well as in the army and the civilian religious community.

By focusing on army chaplains’ evolving, sometimes conflict-ridden relations with
military leaders and soldiers on the one hand and the civilian religious community on the
other, Loveland reveals how religious trends over the past six decades have impacted the
corps and, in turn, helped shape American military culture.
AUTHOR BIOGRAPHY
Anne C. Loveland is T. Harry Williams Professor Emerita at Louisiana State University.
She is the author of Southern Evangelicals and the Social Order, 1800–1860 and American
Evangelicals and the U. S. Military, 1942–1993.
TABLE OF CONTENTS
Contents
Foreword - G. Kurt Piehler, Series Editor
Acknowledgments
Introduction: Army Chaplains in Cultural Transition
1. Teaching the Religion of Democracy
2. The Sixties Watershed
3. Chaplains under Fire
4. Navigating the Quagmire
5. Ministering to the Military Institution
6. “The Conscience of the Army”
7. Ministering on the Battlefield
8. Building Soldier Morale
9. Addressing Religious Pluralism
10. The 2005–2006 Culture War
11. Developing a Culture of Pluralism
Epilogue
Notes
Selected Bibliography
Index
REQUEST ACCESSIBLE FILE