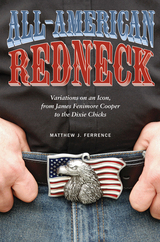 In contemporary culture, the stereotypical trappings of “redneckism” have been appropriated
for everything from movies like Smokey and the Bandit to comedy acts like Larry the
Cable Guy. Even a recent president, George W. Bush, shunned his patrician pedigree in favor
of cowboy “authenticity” to appeal to voters. Whether identified with hard work and patriotism
or with narrow-minded bigotry, the Redneck and its variants have become firmly
established in American narrative consciousness.

This provocative book traces the emergence of the faux-Redneck within the context of
literary and cultural studies. Examining the icon’s foundations in James Fenimore Cooper’s
Natty Bumppo—“an ideal white man, free of the boundaries of civilization”—and the degraded
rural poor of Erskine Caldwell’s Tobacco Road, Matthew Ferrence shows how Redneck
stereotypes were further extended in Deliverance, both the novel and the film, and in
a popular cycle of movies starring Burt Reynolds in the 1970s and ’80s, among other manifestations.
As a contemporary cultural figure, the author argues, the Redneck represents
no one in particular but offers a model of behavior and ideals for many. Most important,
it has become a tool—reductive, confining, and (sometimes, almost) liberating—by which
elite forces gather and maintain social and economic power. Those defying its boundaries,
as the Dixie Chicks did when they criticized President Bush and the Iraq invasion, have
done so at their own peril. Ferrence contends that a refocus of attention to the complex
realities depicted in the writings of such authors as Silas House, Fred Chappell, Janisse Ray,
and Trudier Harris can help dislodge persistent stereotypes and encourage more nuanced
understandings of regional identity.

In a cultural moment when so-called Reality Television has turned again toward popular
images of rural Americans (as in, for example, Duck Dynasty and Moonshiners), All-
American Redneck reveals the way in which such images have long been manipulated for
particular social goals, almost always as a means to solidify the position of the powerful at
the expense of the regional.
AUTHOR BIOGRAPHY
Matthew J. Ferrence is an assistant professor of English at Allegheny College.
REVIEWS
“All-American Redneck is a book that will really turn some heads.”
—Douglas Reichert Powell, professor of English at Columbia College Chicago and
author of Critical Regionalism: Connecting Politics and Culture in the American Landscape