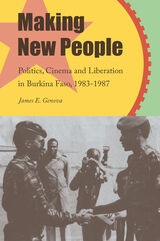 On August 4, 1983, Captain Thomas Sankara led a coalition of radical military officers, communist activists, labor leaders, and militant students to overtake the government of the Republic of Upper Volta. Almost immediately following the coup’s success, the small West African country—renamed Burkina Faso, or Land of the Dignified People—gained international attention as it charted a new path toward social, economic, cultural, and political development based on its people’s needs rather than external pressures and Cold War politics. James E. Genova’s Making New People: Politics, Cinema, and Liberation in Burkina Faso, 1983–1987 recounts in detail the revolutionary government’s rise and fall, demonstrating how it embodied the critical transition period in modern African history between the era of decolonization and the dawning of neoliberal capitalism. It also uncovers one of the revolution’s most enduring and significant aspects: its promotion of film as a vehicle for raising the people’s consciousness, inspiring their efforts at social transformation, and articulating a new self-generated image of Africa and Africans. Foregrounding film and drawing evocative connections between Sankara’s political philosophy and Frantz Fanon, Making New People provides a deeply nuanced explanation for the revolution’s lasting influence throughout Africa and the world.
AUTHOR BIOGRAPHY
JAMES E. GENOVA is professor of history and film studies at Ohio State University at Marion. He is the author of Colonial Ambivalence, Cultural Authenticity, and the Limitations of Mimicry in French-Ruled West Africa, 1914–1956 (2004) and Cinema and Development in West Africa (2013).
REVIEWS
“Making New People: Politics, Cinema, and Liberation in Burkina Faso, 1983–1987 is intellectually engaging, compelling, and well crafted. James E. Genova’s book is an authoritative cultural history of Thomas Sankara’s historic revolution in Burkina Faso.”
—OLUFEMI O. VAUGHAN, Alfred Sargent Lee ’41 and Mary Farley Ames Lee Professor of Black Studies, Amherst College, and author, Religion and the Making of Nigeria