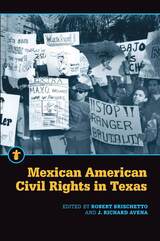 Inspired by a 1968 U.S. Commission on Civil Rights six-day hearing in San Antonio that introduced the Mexican American people to the rest of the nation, this book is an examination of the social change of Mexican Americans of Texas over the past half century. The San Antonio hearing included 1,502 pages of testimony, given by more than seventy witnesses, which became the baseline twenty experts used to launch their research on Mexican American civil rights issues during the following fifty years. These experts explored the changes in demographics and policies with regard to immigration, voting rights, education, employment, economic security, housing, health, and criminal justice. While there are a number of anecdotal historical accounts of Mexican Americans in Texas, this book adds an evidence-based examination of racial and ethnic inequalities and changes over the past half century. The contributors trace the litigation on behalf of Latinos and other minorities in state and federal courts and the legislative changes that followed, offering public policy recommendations for the future. The fact that this study is grounded in Texas is significant, as it was the birthplace of a majority of Chicano civil rights efforts and is at the heart of Mexican American growth and talent, producing the first Mexican American in Congress, the first Mexican American federal judge, and the first Mexican American candidate for president. As the largest ethnic group in the state, Latinos will continue to play a major role in the future of Texas.
AUTHOR BIOGRAPHY
ROBERT BRISCHETTO has served as expert witness in more than forty voting rights cases throughout the southwestern United States and has authored more than 120 academic and popular publications throughout his career.

J. RICHARD AVENA served as the first Mexican American executive director of the American Civil Liberties Union of Texas and is also former southwest regional director of the U.S. Commission on Civil Rights.
REVIEWS
This book constitutes a milestone in documenting the post–1968 uncivil treatment of Mexican-descent people in Texas. A timely benchmark to measure both future indiscretions and future progress in the fields of immigration,  voting, education, labor, housing, employment, and criminal justice in Texas.—Cynthia E. Orozco, professor, history and humanities, Eastern New Mexico University–Ruidoso