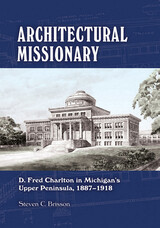 The first and most prolific professional architect to reside permanently in Michigan’s Upper Peninsula, D. Fred Charlton used the local Lake Superior sandstone to craft the distinctive style found in buildings throughout Michigan’s Upper Peninsula. Born in England and trained there as a civil engineer, Charlton came to Detroit in the late 1870s, seeking work as a draftsman. Much like his peers of the time, he had no formal training as an architect and learned his trade by working at several prominent firms. The last, Scott & Company, sent him to Marquette in 1887 to open a branch office. Three years later, Charlton opened his own firm, and over the next twenty-eight years, he designed more than four hundred buildings, including residences, commercial structures, schools, courthouses, and churches throughout the region, which offer an invaluable insight into the tastes of Americans before the World War I and provide a unique vantage point for studying the evolution of the architectural profession. Deftly adapting national trends, he provided the communities of the Upper Peninsula with modern structures worthy of any place in the nation. Many of his buildings remain to this day, monuments to the skill of this English-born architect who made a place for himself upon the shores of Lake Superior. Anyone interested in architecture and in the history of the upper Midwest will find this read both fascinating and informative.
AUTHOR BIOGRAPHY
STEVEN C. BRISSON is director of Mackinac State Historic Parks, vice chair of the Association for Great Lakes Maritime History, and a former board member of the Michigan Humanities Council.
REVIEWS
Steven C. Brisson has written a comprehensive account of the work of D. Fred Charlton and his collaborators. From the main office in Marquette and branches in Milwaukee and elsewhere in the Upper Peninsula, they contributed to the physical appearance of the Lake Superior region. Through solid architectural design and the use of locally quarried red Lake Superior sandstone, Charlton accomplished this.—Kathryn Bishop Eekert, author of The Sandstone Architecture of the Lake Superior Region and Buildings of Michigan