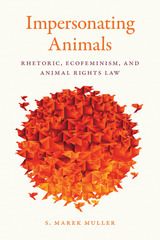 In 2011, in one sign of a burgeoning interest in the morality of human interactions with nonhuman animals, a panel hosted by the American Association for the Advancement of Science declared that dolphins and orcas should be legally regarded as persons. Multiple law schools now offer classes in animal law and have animal law clinics, placing their students with a growing range of animal rights and animal welfare advocacy organizations. But is legal personhood the best means to achieving total interspecies liberation? To answer that question, Impersonating Animals evaluates the rhetoric of animal rights activists Steven Wise and Gary Francione, as well as the Earth jurisprudence paradigm. Deploying a critical ecofeminist stance sensitive to the interweaving of ideas about race, gender, class, sexuality, ability, and species, author S. Marek Muller places animal rights rhetoric in the context of discourses in which some humans have been deemed more animal than others and some animals have been deemed more human than others. In bringing rhetoric and animal studies together, she shows that how we communicate about nonhuman beings necessarily affects relationships across species boundaries and among people. This book also highlights how animal studies scholars and activists can and should use ideological rhetorical criticism to investigate the implications of their tactics and strategies, emphasizing a critical vegan rhetoric as the best means of achieving liberation for human and nonhuman animals alike.
AUTHOR BIOGRAPHY
S. MAREK MULLER is an Assistant Professor of Rhetorical Studies at Florida Atlantic University.
REVIEWS
“This impressive and engaging book demonstrates why those who care about nonhuman animal rights should also care about rhetoric, and why those who are mindful of rhetoric should also be mindful of nonhuman animals.”
—GARRETT M. BROAD, Assistant Professor of Communication and Media Studies, Fordham University, and author of More Than Just Food: Food Justice and Community Change

TABLE OF CONTENTS
Contents
Acknowledgments
Introduction: Rhetoric(s) of Animal Rights and the Law
Chapter 1. Critical Refurbishments: Ecofeminist Legal Theory and Rhetorical Methodologies
Chapter 2. All Animals Are Equal (but Some Are More Equal than Others): Speciesist Personhoods in the Nonhuman Rights Project
Chapter 3. For the Good of the Species: Species Essentialisms and Eugenics in Gary Francione’s “Vegan Abolitionism”
Chapter 4. Radical Environmentalism as Animal Rights Law? Ecological Ambivalences and the Rhetoric of Earth Jurisprudence
Conclusion: Envisioning a Critical Vegan Rhetoric
References
Index
REQUEST ACCESSIBLE FILE