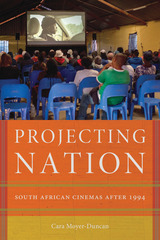 In 1994, not long after South Africa made its historic transition to multiracial democracy, the nation’s first black-majority government determined that film had the potential to promote social cohesion, stimulate economic development, and create jobs. In 1999 the new National Film and Video Foundation was charged with fostering a vibrant, socially engaged, and self-sufficient film industry. What are the results of this effort to create a truly national cinematic enterprise? Projecting Nation: South African Cinemas after 1994 answers that question by examining the ways in which national and transnational forces have shaped the representation of race and nation in feature-length narrative fiction films. Offering a systematic analysis of cinematic texts in the context of the South African film industry, author Cara Moyer-Duncan analyzes both well-known works like District 9 (2009) and neglected or understudied films like My Shit Father and My Lotto Ticket (2008) to show how the ways filmmakers produce cinema and the ways diverse audiences experience it—whether they watch major releases in theaters in predominantly white suburban enclaves or straight-to-DVD productions in their own homes—are informed by South Africans’ multiple experiences of nation in a globalizing world.
AUTHOR BIOGRAPHY
CARA MOYER-DUNCAN is an Assistant Professor of Africana Studies in the Institute for Liberal Arts and Interdisciplinary Studies at Emerson College.
REVIEWS
“The history of South African film is well documented, especially during the period of political transition. Less well examined is the contemporary post-millennial era, on which Moyer-Duncan’s book offers a very useful analytical frame to underpin study of those cinema themes that followed liberation after 1994.”
—KEYAN G. TOMASELLI, Distinguished Professor of Communication Studies, University of Johannesburg, and Professor Emeritus and Fellow,
University of KwaZulu-Natal