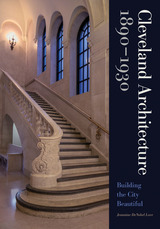 This study looks at the architectural transformation of Cleveland during its “golden age”—roughly the period between post–Civil War reconstruction and World War I. By the early twentieth century, Cleveland, which would evolve into the fifth largest city in America, hoped to shed the gritty industrial image of its rapid-growth period and evolve into a city to match the political clout of its statesmen like John Hay and wealth of its business elites such as John D. Rockefeller. Encouraged by the spectacle and public  response to the Beaux-Arts buildings of the Chicago World’s Exposition of 1893, the city embarked upon a grand scheme to construct new governmental and civic structures known as the Cleveland Plan of Grouping Public Buildings, one of the earliest and most complete City Beautiful planning schemes in the country. The success of this plan led to a spillover effect that prompted architects to design all manner of new public buildings with similar Beaux-Arts stylistic characteristics during the next three decades. With the group plan realized, civic leaders— with the goal of expanding the city’s cultural institutions to match the distinction of its civic center—established its counterpart in  University Circle, creating a secondary group plan, the first cultural center in the country.
AUTHOR BIOGRAPHY
JEANNINE DENOBEL LOVE is an independent art historian focusing on American art and architecture from the late nineteenth to mid-twentieth century.
REVIEWS
“A stunning accomplishment, Cleveland Architecture, 1890–1930 is at once a history, encyclopedia, and analysis of the City Beautiful movement. This book contains startlingly original research and is a comprehensive resource for anyone interested in Cleveland, architecture, or history. This is such a necessary book, and by writing it, Jeannine deNobel Love has done a remarkable service to the city and scholarship.”
—ANNE TRUBEK, author of The History and Uncertain Future of Handwriting, and founder of Belt Publishing

TABLE OF CONTENTS
Contents
Introduction
Part 1. Cleveland’s Architectural Journey from Outpost to Metropolis
Early Cleveland and Its Western Reserve Legacy
Economics and Politics in Cleveland at the Turn of the Twentieth Century
The École des Beaux-Arts and Its Influence on the Academic Tradition in America
The Rise of the International Exposition and the Chicago World’s Fair of 1893
The City Beautiful Movement and Emergence of City Planning
Cleveland’s 1903 Group Plan and the University Circle Cultural Center Plan
Conclusion
Part 2. Catalog of Buildings
Commemorative Buildings
Commercial Buildings
Civic and Governmental Buildings
Cultural Buildings
Acknowledgments
Source Abbreviations
Notes
Bibliography
Index
REQUEST ACCESSIBLE FILE