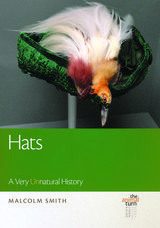 For such simple garments, hats have had a devastating impact on wildlife throughout their long history. Made of wild-caught mammal furs, decorated with feathers or whole stuffed birds, historically they have driven many species to near extinction. By the turn of the twentieth century, egrets, shot for their exuberant white neck plumes, had been decimated; the wild ostrich, killed for its feathers until the early 1900s, was all but extirpated; and vast numbers of birds of paradise from New Guinea and hummingbirds from the Americas were just some of the other birds killed to decorate ladies’ hats. At its peak, the hat trade was estimated to be killing 200 million birds a year. At the end of the nineteenth century, it was a trade valued at £20 million (over $25 million) a year at the London feather auctions. Weight for weight, exotic feathers were more valuable than gold. Today, while no wild birds are captured for feather decoration, some wild animals are still trapped and killed for hatmaking. A fascinating read, Hats will have you questioning the history of your headwear.
AUTHOR BIOGRAPHY
MALCOLM SMITH is a biologist, a former chief scientist and deputy chief executive at the Countryside Council for Wales, and a former board member of the Environment Agency, Europe’s largest environmental regulator, for England and Wales.
REVIEWS
“Revelatory and ambitious, Hats exposes the diabolically efficient network of plumage hunters and fur trappers that girdled the late nineteenthcentury globe. No bird or beaver was safe—and all for the sake of a hat.”
—TESSA BOASE, author of Mrs Pankhurst’s Purple Feather: Fashion, Fury and Feminism—Women’s Fight for Change