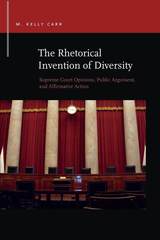 Despite the tepid reception of Regents of the University of California v. Bakke in 1978, the Supreme Court has thrice affirmed its holding: universities can use race as an admissions factor to achieve the goal of a diverse student body. This book examines the process of rhetorical invention followed by Justice Lewis F. Powell Jr., his colleagues, and other interlocutors as they sifted through arguments surrounding affirmative action policies to settle on diversity as affirmative action’s best constitutional justification. Here M. Kelly Carr explores the goals, constraints, and argumentative tools of the various parties as they utilized the linguistic resources available to them, including arguments about race, merit, and the role of the public university in civic life. Using public address texts, legal briefs, memoranda, and draft opinions, Carr looks at how public arguments informed the amicus briefs, chambers memos, and legal principles before concluding that Powell’s pragmatic decision making fused the principle of individualism with an appreciation of multiculturalism to accommodate his colleagues’ differing opinions. She argues that Bakke is thus a legal and rhetorical milestone that helped to shift the justificatory grounds of race-conscious policy away from a recognition of historical discrimination and its call for reparative equality, and toward an appreciation of racial diversity.
AUTHOR BIOGRAPHY
M. KELLY CARR is an Assistant Professor of Communication and Basic Course Director at the University of West Florida.
REVIEWS
2019 Kohrs-Campbell Prize in Rhetorical Criticism
— 2019 Kohrs-Campbell Prize in Rhetorical Criticism