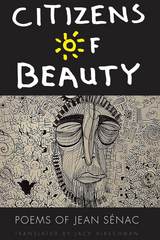 Now available in English for the first time, translated by the poet Jack Hirschman, this beautiful collection of poems by the Algerian poet Jean Sénac (1926–1973) was originally published when he was forty-one. Sénac represented the hope of the new generation of Algerians who were celebrating their independence from France after 130 years of colonialism, and in the tradition of René Char and the early Albert Camus, he portrayed an Algeria whose land and people would finally sing with their own voice. Sénac celebrates revolution, love, and the body, beginning with the resonant verses: “And now we’ll sing love / for there’s no Revolution without love.” He sang, as well, of beauty: “No morning without smiling. / Beauty on our lips is one continuous fruit.”
AUTHOR BIOGRAPHY
Jean Sénac is considered one of the most important poets from Algeria.
REVIEWS
2016 World Literature Today’s Notable Translations
— 2016 World Literature Today’s Notable Translations

TABLE OF CONTENTS
Contents
Introduction
Citizens of Beauty
Arbatache
The Night of Doubt
Words with Walt Whitman
Summoning the Diwan of the Pier
Brahim, the Generous
An Island against Death
REQUEST ACCESSIBLE FILE