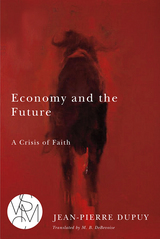 A monster stalks the earth—a sluggish, craven, dumb beast that takes fright at the slightest noise and starts at the sight of its own shadow. This monster is the market. The shadow it fears is cast by a light that comes from the future: the Keynesian crisis of expectations. It is this same light that causes the world’s leaders to tremble before the beast. They tremble, Jean-Pierre Dupuy says, because they have lost faith in the future. What Dupuy calls Economy has degenerated today into a mad spectacle of unrestrained consumption and speculation. But in its positive form—a truly political economy in which politics, not economics, is predominant—Economy creates not only a sense of trust and confidence but also a belief in the open-endedness of the future without which capitalism cannot function. In this devastating and counterintuitive indictment of the hegemonic pretensions of neoclassical economic theory, Dupuy argues that the immutable and eternal decision of God has been replaced with the unpredictable and capricious judgment of the crowd. The future of mankind will therefore depend on whether it can see through the blindness of orthodox economic thinking.
AUTHOR BIOGRAPHY
Jean-Pierre Dupuy is Professor of Social and Political Philosophy at the École Polytechnique, Paris.
REVIEWS
From a few simple questions Jean-Pierre Dupuy draws a number of profound insights, not always easy to grasp, that run contrary to the usual interpretation of the recent economic crisis. The trouble is well worth it.
—Julie Clarini, Le Monde

TABLE OF CONTENTS
Contents
Introduction. The Bewilderment of Politics
Chapter 1. Economy and the Problem of Evil
Chapter 2. Self-Transcendence
Chapter 3. The Economics of the End and the End of Economics
Chapter 4. Critique of Economic Reason
Conclusion. The Way Out from Fatalism
Appendix. Time, Paradox
Notes
Index
REQUEST ACCESSIBLE FILE