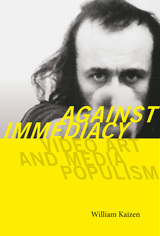 Against Immediacy is a history of early video art considered in relation to television in the United States during the 1960s and 1970s. It examines how artists questioned the ways in which “the people” were ideologically figured by the commercial mass media. During this time, artists and organizations including Nam June Paik, Juan Downey, and the Women’s Video News Service challenged the existing limits of the one-to-many model of televisual broadcasting while simultaneously constructing more democratic, bottom-up models in which the people mediated themselves. Operating at the intersection between art history and media studies, Against Immediacy connects early video art and the rise of the media screen in gallery-based art to discussions about participation and the activation of the spectator in art and electronic media, moving from video art as an early form of democratic media practice to its canonization as a form of high art.
AUTHOR BIOGRAPHY
William Kaizen is an independent scholar and curator. His research focuses on the history and politics of new media, from video art to video games. His most recent book, Adventure (for Adults) revisits the classic Atari VCS game Adventure. He has curated exhibitions on the work of pop artist Derek Boshier and the history of pop art on film in the U.S. and U.K.
TABLE OF CONTENTS