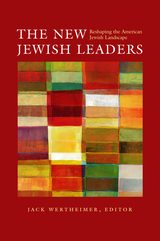 By the end of the twentieth century, a new generation of leaders had begun to assume positions of influence within established organizations. They quickly launched a slew of new initiatives directed at their age peers. Born during the last quarter of the twentieth century, these leaders came of age in a very different America and a different Jewish world than earlier generations. Not surprisingly, their worldview and understanding of Jewish issues set them apart from their elders, as does their approach to organizing. Based upon extensive interviews and survey research, as well as an examination of the websites frequented by younger Jews and personal observation of their programs, The New Jewish Leaders presents a pioneering account of the renewal of American Jewish community. This book describes how younger Jews organize, relate to collective Jewish efforts, and think about current Jewish issues. It also offers a glimpse of how they re-envision American Jewish communal arrangements. What emerges is a fascinating exploration of Jewish community in America today—and tomorrow.
AUTHOR BIOGRAPHY
JACK WERTHEIMER is the Joseph and Martha Mendelson Professor of American Jewish History at the Jewish Theological Seminary. He is author or editor of more than a dozen books.
TABLE OF CONTENTS