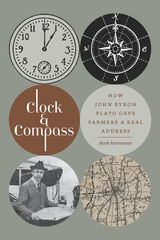 A city guy who aspired to be a farmer, John Byron Plato took a three-month winter course in agriculture at Cornell before starting high school, which he left a year before graduation to fight in the Spanish-American War. He worked as a draftsman, ran a veneers business, patented and manufactured a parking brake for horse-drawn delivery wagons, taught school, and ran a lumber yard. In his early thirties he bought some farmland north of Denver, Colorado, and began raising Guernsey cattle, which he advertised for sale in the local paper. When an interested buyer eager to see his calves couldn’t find his farm, Plato realized that an RFD postal address was only good for delivering mail.

Plato’s solution was a map-and-directory combo that used direction and distance from a local business center to give farmers a real address, just like city dwellers. He patented his invention called the “Clock System” and tried to sell it to the Post Office Department. What follows is a tale of persistence and failure as rural farming declined and technology and capitalism overtook John Byron Plato’s chances at geographic immortality.
AUTHOR BIOGRAPHY
Mark Monmonier is Distinguished Professor Emeritus of Geography and the Environment at Syracuse University’s Maxwell School of Citizenship and Public Affairs. He has authored twenty books, including How to Lie with Maps. He lives in Syracuse, New York.
REVIEWS
“A leading expert in twentieth-century cartography, Mark Monmonier has given us a thoroughly researched and engaging history of John Byron Plato and his ingenious, patented clock system for creating rural addresses. This is a must read.”—Judith Tyner, author, Women in American Cartography: An Invisible Social History


“Well-written, thoroughly researched, and richly illustrated, Mark Monmonier’s Clock and Compass is more than a simple tale of an entrepreneurial cartographer. The fact that Plato’s system was not widely utilized does not make the story less significant. Monmonier offers insight into geography and mapmaking, the changing social landscape of rural America, and government bureaucracy.”—J. L. Anderson, author, Capitalist Pigs: Pigs, Pork, and Power in America