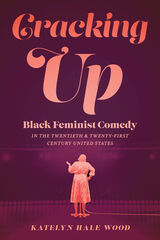 Katelyn Hale Wood interprets these artists not as tokens in a white, male-dominated field, but as part of a continuous history of Black feminist performance and presence. Broadly, Cracking Up frames stand-up comedy as an important platform from which to examine citizenship in the United States, articulate Black feminist political thought, and subvert structures of power. Wood also champions comedic performance and theatre history as imperative contexts for advancing historical studies of race, gender, and sexuality. From the comedy routines popular on Black vaudeville circuits to stand-up on contemporary social media platforms, Cracking Up excavates an overlooked history of Black women who have made the art of joke-telling a key part of radical performance and political engagement.
AUTHOR BIOGRAPHY

Katelyn Hale Wood is assistant professor of theatre history at the University of Virginia. Their previous writing has been published in Performance Matters, Theatre Topics, QED: A Journal in GLTBQ Worldmaking, Departures in Critical Qualitative Research, and the Routledge Companion to African American Theatre and Performance. Wood lives in Charlottesville, Virginia.

REVIEWS
“Cracking Up is a timely and beautifully written book that boldly centers Black queer feminist subjectivity within the stand-up comedy tradition. By situating Black/queer feminist comedians as intellectuals, activists, and Black cultural producers in their own right, Katelyn Hale Wood captures a long-overdue chapter in Black women’s history and culture.”—La Donna L. Forsgren, author, Sistuhs in the Struggle: An Oral History of Black Arts Movement Theatre and Performance

“Wood expertly examines Black feminist comics who blend humor with resistance and rebellion in this important work. It deserves a place in all performing arts and women’s history sections.”—Library Journal starred review

“Cracking Up is a welcome shift toward a focused politics of joy that invites us to consider how Black comedians, and in particular Black women comedians, have always engendered spaces for community building and celebration, using stand-up comedy to 'crack up' historically oppressive constructs. . . . Wood does not attempt to rescue Black women; instead, she celebrates Black women, their talent, and their work. As part of the book’s method, Wood brings herself into the study, which further enriches it. . . . Scholars looking to laugh and learn will enjoy Cracking Up. . . . Wood’s book cracks us up, bringing us together and pushing us toward a more hopeful and joyful future.”—Studies in American Humor