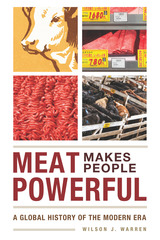 From large-scale cattle farming to water pollution, meat— more than any other food—has had an enormous impact on our environment. Historically, Americans have been among the most avid meat-eaters in the world, but long before that meat was not even considered a key ingredient in most civilizations’ diets. Labor historian Wilson Warren, who has studied the meat industry for more than a decade, provides this global history of meat to help us understand how it entered the daily diet, and at what costs and benefits to society.

Spanning from the nineteenth century to current and future trends, Warren walks us through the economic theory of food, the discovery of protein, the Japanese eugenics debate around meat, and the environmental impact of livestock, among other topics. Through his comprehensive, multifaceted research, he provides readers with the political, economic, social, and cultural factors behind meat consumption over the last two centuries. With a special focus on East Asia, Meat Makes People Powerful reveals how national governments regulated and oversaw meat production, helping transform virtually vegetarian cultures into major meat consumers at record speed.

As more and more Americans pay attention to the sources of the meat they consume, Warren’s compelling study will help them not only better understand the industry, but also make more informed personal choices. Providing an international perspective that will appeal to scholars and nutritionists alike, this timely examination will forever change the way you see the food on your plate.

AUTHOR BIOGRAPHY
Wilson J. Warren is professor and chair of the department of history at Western Michigan University in Kalamazoo. He has published two previous books with the University of Iowa Press on the history and significance of the meat industry: Struggling with “Iowa’s Pride”: Labor Relations, Unionism, and Politics in the Rural Midwest since 1877 (2000) and Tied to the Great Packing Machine: The Midwest and Meatpacking (2007).
REVIEWS

“The field of food studies has recently been attracting considerable attention from scholars in different fields, yet research on animals is one topic that continues to receive insufficient attention. Thus, Warren’s book is a pioneering one that should stimulate scholars’ interest in this topic.”—Chung-Hao Pio Kuo, Center for General Education, Taipei Medical University

“Wilson J. Warren’s richly detailed book is a model of comparative history. Not only does it show how meat became the edible symbol of Japan and China’s modernization / westernization in the twentieth century, but it is a wonderful study of how the world food system developed as well as ongoing problems with it.”—Bruce Kraig, author, A Rich and Fertile Land: A History of Food in America