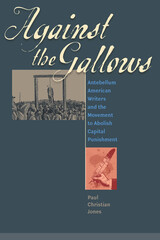 In Against the Gallows, Paul Christian Jones explores the intriguing cooperation of America’s writers—including major figures such as Walt Whitman, John Greenleaf Whittier, E. D. E. N. Southworth, and Herman Melville—with reformers, politicians, clergymen, and periodical editors who attempted to end the practice of capital punishment in the United States during the 1840s and 1850s. In an age of passionate reform efforts, the antigallows movement enjoyed broad popularity, waging its campaign in legislatures, pulpits, newspapers, and literary journals.

Although it failed in its ultimate goal of ending hangings across the United States, the movement did achieve various improvements in the practices of the justice system, including reducing the number of capital crimes, eliminating public executions in most northern states, and abolishing capital punishment completely in three states.

Although a few historians have studied the antebellum movement against capital punishment, until now very little attention has been paid to the role of America’s writers in these efforts. Jones’s study recovers the relationship between the nation’s literary figures and the movement against the death penalty, illustrating that the editors of literary journals actively encouraged and published antigallows writing, that popular crime novelists created a sympathy toward criminals that led readers to question the state’s justifications for capital punishment, that poets crafted verse that advocated strongly for Christian sympathy for criminals that coincided with an antipathy to the death penalty, and that female sentimental writers fashioned melodramatic narratives that illustrated the injustice of the hanging and reimagined the justice system itself as a sympathetic subject capable of incorporating compassion into its workings and seeing reform rather than revenge as its ends.
AUTHOR BIOGRAPHY

Paul Christian Jones is an associate professor in the Department of English at Ohio University. He is the author of Unwelcome Voices: Subversive Fiction in the Antebellum South, which won the Nancy Dasher Prize for Literary Scholarship by the College English Association of Ohio, and editor, with Dorothy Scura, of Evelyn Scott: Recovering a Lost Modernist.

“This is an unusually original, interesting, and valuable exploration of important areas of nineteenth-century American literature and culture. Jones convincingly demonstrates that the movement against the death penalty in antebellum America was far more pervasive and culturally influential than previous scholars (including myself) have imagined and that this cultural influence played out in various forms of literature in ways that are largely unrecognized today.”—H. Bruce Franklin, author, Prison Writing in Twentieth-Century America and The Important Fish in the Sea: Menhaden and America


“In Against the Gallows, Jones demonstrates the vitality and variety of anti–death penalty sentiment in antebellum literature. Jones discusses well-known and lesser known literary works, illustrating the determined involvement of writers and editors in the other abolitionist struggle. Against the Gallows is an eminently readable and important work.”—Katy Ryan, West Virginia University