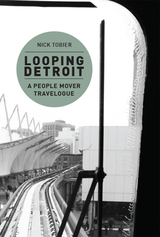 Looping Detroit: A People Mover Travelogue
by Nick Tobier
Michigan Publishing Services, 2016
Paper: 978-1-60785-379-4
Equal parts urban culture and poetic travelogue, Looping Detroit is a collection of observations each taking place in and around one station stop of Detroit’s People Mover. Built in 1987, the People Mover was and is largely regarded as a public transit boondoggle—costly, circumscribed, and, in light of these, a particularly egregious investment within a city lacking sufficient public transportation. At a time when Detroit’s downtown development is booming, with tremendous investment in a downtown that was ignored for decades, the very real possibility exists that this new interest will parallel the same investment patterns that brought the over invested People Mover to a fragment of the city.

Looping Detroit invites artists and writers to ride the small loop as an explorer, mining the environs around each station as a poetic ramble, a psycho geographic wander, a cultural inquiry that simultaneously ponders the poetics of circulating above the city streets while probing the greater narrative of Detroit’s public transit conundrum.