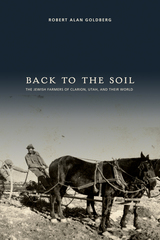 The image of the Jew solely as urbanite may stem from the period of 1880 to 1920, when two million Jews left their homes in Eastern Europe and established themselves in the urban centers of America. Lesser known are the agrarian efforts of Jewish immigrants. In Back to the Soil, Robert Goldberg focuses on the attempt of one such Jewish colony in Clarion, Utah. In 1911, eighty-one families left eastern cities to farm the Clarion tract. Jewish families funded the venture, the governor of Utah en-couraged it, and the Mormon Church financially aided the community. Despite these efforts, Clarion died as an organizational entity in 1916, with the dozen remaining families departing by the mid-1920s.

Goldberg sheds light on the values and ideals of the colonists, the daily rhythm of life, the personalities of the settlers, and the struggle for and eventual collapse of their dream. Of all the attempts to establish a Jewish colony on the land, Clarion was the largest and had the longest existence of any colony west of the Appalachians. The Clarion fragment, lost and forgotten, thus becomes a crucial part of the larger mosaic of Jewish history in the West.

Release of this new paperback edition is timed to coincide with the celebration of the centennial of the founding of the Clarion colony.

Robert Alan Goldberg is professor of history and director of the Tanner Humanities Center at the University of Utah. His most recent books are Barry Goldwater and Enemies Within: The Culture of Conspiracy in Modern America.

“Goldberg recounts [the] story in lively fashion, supplementing the narrative with relevant quantitative information. This is a balanced and attractive model for regional ethnic-economic history.”—American Historical Review

“[Goldberg’s] research is truly prodigious, and he has uncovered a great deal of important information. Pieces together a previously unknown story, utilizes innovative methodologies, and serves as an interesting case study of an agricultural colony’s rise and fall.”—The Journal of American History