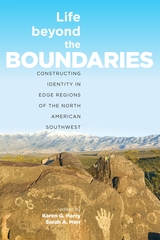 Life beyond the Boundaries explores identity formation on the edges of the ancient Southwest. Focusing on some of the more poorly understood regions, including the Jornada Mogollon, the Gallina, and the Pimería Alta, the authors use methods drawn from material culture science, anthropology, and history to investigate themes related to the construction of social identity along the perimeters of the American Southwest.

Through an archaeological lens, the volume examines the social experiences of people who lived in edge regions. Through mobility and the development of extensive social networks, people living in these areas were introduced to the ideas and practices of other cultural groups. As their spatial distances from core areas increased, the degree to which they participated in the economic, social, political, and ritual practices of ancestral core areas increasingly varied. As a result, the social identities of people living in edge zones were often—though not always—fluid and situational.

Drawing on an increase of available information and bringing new attention to understudied areas, the book will be of interest to scholars of Southwestern archaeology and other researchers interested in the archaeology of low-populated and decentralized regions and identity formation. Life beyond the Boundaries considers the various roles that edge regions played in local and regional trajectories of the prehistoric and protohistoric Southwest and how place influenced the development of social identity.

Karen G. Harry is professor in the Department of Anthropology at the University of Nevada, Las Vegas. She has authored or coauthored two books and regularly publishes in peer-reviewed books and journals. Her ongoing field research focuses on Virgin Branch Puebloan settlements on the north rim of the Grand Canyon.

Sarah Herr is president of Desert Archaeology Inc. in Arizona and editor of the Society for American Archaeology journal Advances in Archaeological Practice. She has conducted numerous cultural resource management projects in Arizona and writes about frontiers and landscapes.

REVIEWS
“The volume fills a niche in ‘edge’ or ‘periphery’ research. . . . An enormous contribution to the profession.”
—Katherine Spielmann, Arizona State University

“This volume is an engaging and interesting opening to conversations about edge-regions in the archaeology of the North American Southwest that portray the region as even more dynamic than has historically been considered.”
—Midcontinental Journal of Archaeology


"This provocative volume is delightfully disruptive because it challenges archaeological investigations of identity epistemologically and methodologically (e.g., does variation in architecture and among artifact classes faithfully register identity construction to the same degree?).With these robust studies as a foundation, importantly, futureinquiries are positioned to produce ever more surprising interpretations of the causesand consequences of identity formation across the Southwest’s expansive hinterlands."
—Journal of Anthropoligical Research


"This volume successfully addresses understudied areas and contributes to our understanding of low-populated and decentralized regions." —Southwestern Lore

"This volume amply repays the time spent reading it. It is recommended for those interested in archaeology outside the Southwest core areas, and for all who hopeto understand the region as a whole."
—New Mexico Historical Review

TABLE OF CONTENTS
Contents
1. Life beyond the Boundaries
2. Frontiers of Marginality and Mediation in the North American Southwest
3. Pueblo Emergence on the Taos Frontier
4. Sophisticated Rebels
5. Shaping Identity in Prehispanic Southern Nevada
6. Architectural Traditionsin the Early Pueblo Period Puerco Valley
7. Enculturation and Large-Scale Group Identity from the Center to the Edge of the Late Pre-Classic Hohokam World
8. A Millennium of Identity Formation and Maintenance in the Jornada Mogollon Region
9. Long-Term, Constant, and Stable Identities and Social Relationships with and within the Mimbres Region of Southwestern New Mexico
10. Negotiating Identity in the Wake of European Contact in the Pimería Alta
About the Authors
Index
REQUEST ACCESSIBLE FILE