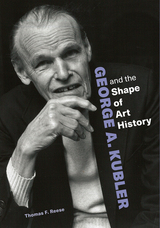 An illuminating intellectual biography of a pioneering and singular figure in American art history.

Art historian George A. Kubler (1912–1996) was a foundational scholar of ancient American art and archaeology as well as Spanish and Portuguese architecture. During over five decades at Yale University, he published seventeen books that included innovative monographs, major works of synthesis, and an influential theoretical treatise. In this biography, Thomas F. Reese analyzes the early formation, broad career, and writings of Kubler, casting nuanced light on the origins and development of his thinking.

Notable in Reese’s discussion and contextualization of Kubler’s writings is a revealing history and analysis of his Shape of Time—a book so influential to students, scholars, artists, and curious readers in multiple disciplines that it has been continuously in print since 1962. Reese reveals how pivotal its ideas were in Kubler’s own thinking: rather than focusing on problems of form as an ordering principle, he increasingly came to sequence works by how they communicate meaning. The author demonstrates how Kubler, who professed to have little interest in theory, devoted himself to the craft of art history, discovering and charting the rules that guided the propagation of structure and significance through time.
AUTHOR BIOGRAPHY
Thomas F. Reese is professor of art history at Tulane University. He is a specialist in eighteenth-century Spanish art and politics and Latin American architecture and urbanism.