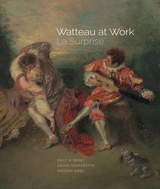 The painting La Surprise by Jean Antoine Watteau (1684–1721) belongs to a new genre of painting invented by the artist himself—the fête galante. These works, which show graceful open-air gatherings filled with scenes of courtship, music and dance, strolling lovers, and actors, do not so much tell a story as set a mood: one of playful, wistful, nostalgic reverie. Esteemed by collectors in Watteau’s day as a work that showed the artist at the height of his skill and success, La Surprise vanished from public view in 1848, not to reemerge for more than a century and a half. Acquired by the Getty Museum in 2017, it has never before been the subject of a dedicated publication. Marking the three hundredth anniversary of Watteau’s death, this book considers La Surprise within the context of the artist’s oeuvre and discusses the surprising history of collecting Watteau in Los Angeles.

Richard Rand is associate director for collections at the J. Paul Getty Museum.
REVIEWS
“The next best thing to being able to personally visit the exhibit.”
— Midwest Book Review