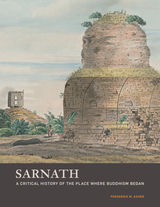 The first analytical history of Sarnath, the place where the Buddha preached his first sermon and established the Buddhist monastic order.

Sarnath has long been regarded as the place where the Buddha preached his first sermon and established the Buddhist monastic order. Excavations at Sarnath have yielded the foundations of temples and monastic dwellings, two Buddhist reliquary mounds (stupas), and some of the most important sculptures in the history of Indian art. This volume offers the first critical examination of the historic site.

Frederick M. Asher provides a longue durée (long-term) analysis of Sarnath—including the plunder, excavation, and display of antiquities and the Archaeological Survey of India’s presentation—and considers what lies beyond the fenced-in excavated area. His analytical history of Sarnath’s architectural and sculptural remains contains a significant study of the site’s sculptures, their uneven production, and their global distribution. Asher also examines modern Sarnath, which is a living establishment replete with new temples and monasteries that constitute a Buddhist presence on the outskirts of Varanasi, the most sacred Hindu city.
AUTHOR BIOGRAPHY
Frederick M. Asher was professor emeritus of art history at the University of Minnesota who specialized in South Asian art.
REVIEWS
“An enlightened guide for aficionados and armchair travelers alike.”
— Minerva