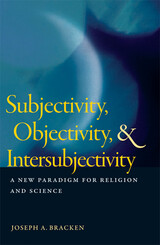 During the Middle Ages, philosophers and theologians argued over the extramental reality of universal forms or essences. In the early modern period, the relation between subjectivity and objectivity, the individual self and knowledge of the outside world, was a rich subject of debate. Today, there is considerable argument about the relation between spontaneity and determinism within the evolutionary process, whether a principle of spontaneous self-organization as well as natural selection is at work in the aggregation of molecules into cells and the development of primitive forms of life into complex organisms. In Subjectivity, Objectivity and Intersubjectivity, Joseph A. Bracken proposes that what is ultimately at stake here is the age-old problem of the relationship between the One and the Many, universality and particularity on different levels of existence and activity within nature.
Bracken rejects traditional models of this relationship, wherein either the One or the Many is presupposed to have priority over the other. He instead suggests that a new social ontology—one that is grounded in a theory of universal intersubjectivity—protects both the concrete particularity of individual entities in their specific relations to one another and their enduring corporate reality as a stable community or environment within Nature.
What emerges is a bold reimagining of the sometimes strained relationship between religion and science. Bracken's clear writing, sophisticated philosophical analysis, and exemplary scholarship will lend this new work an enthusiastic appreciation by readers with deep interests in philosophy and philosophical theology.
AUTHOR BIOGRAPHY
Joseph A. Bracken, SJ, is a retired professor of theology and director emeritus of the Edward B. Brueggeman Center for Dialogue at Xavier University in Cincinnati, Ohio, and is the author of seven books and editor or coeditor of two other works in the area of philosophical theology. His focus in recent years has been on the God-world relationship both as it figures in the religion and science debate and in interreligious dialogue. He is a long-time student of the philosophy of Alfred North Whitehead but has modified it in some measure so as to make it more compatible with traditional Christian beliefs such as creation out of nothing, the doctrine of the Trinity, and eschatology.
TABLE OF CONTENTS