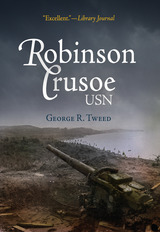 An Inspiring Story of Survival and Friendship
At the same time as the attack on Pearl Harbor, Japan captured American Guam. Given the choice of surrendering or being taken prisoner, George R. Tweed escaped into the countryside. Aided by Chamorro natives who risked their lives to keep him safe, Tweed survived for two and a half years until he was eventually rescued by the U.S. Navy. In Robinson Crusoe, USN, first published in 1945, Tweed recounts his remarkable experiences and the debt of gratitude he held for those who help keep him alive.

"In many ways this book is superior to the Robinson Crusoe we read as children. Tweed was confronted by greater dangers and greater difficulties. And his ingenuity was also greater: Electric lights, a radio, an elaborate alarm system, furniture, clothing, these were some of the things Tweed contrived during his 2 1/2 years of dangerous exile. Readers will marvel at the tenacity and will to live of a fellow man. . . . This is a book to read. It is also a book to own; your children and your grandchildren will want to read it some day.” —Springfield Republican