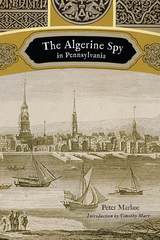 In 1787, while American sailors languished in a Barbary prison, delegates debated the Constitution in Philadelphia. Despite America’s desire to respond to the crisis, without a central government, the new republic had no means to create a naval force. Enter an anonymously published book, The Algerine Spy in Pennsylvania: or, Letters Written by a Native of Algiers on the Affairs of the United States in America, which began circulating among the delegates. Consisting of a series of letters ostensibly written by an Algerian agent “Mehmet” back to his leader, the spy predicted that the former colonies would never be able to resolve their differences and be “ruined by disunion.” The book created a sensation and it helped tip the balance for those in favor of adopting the new Constitution. Following the Constitution’s final ratification in 1789, the United States created a navy and began asserting its power overseas. With its commentary about men and women, business and pleasure, and historical and religious comparisons between nations, The Algerine Spy in Pennsylvania provides both a contemporary snapshot of early American life and the political ideas of the period. Never before reprinted, and recently rated one of the five best works in the history of America’s encounter with the Arab world, this new edition is edited by historian Timothy Marr, who reconsiders the importance of this early work in the political and literary history of the United States.

TIMOTHY MARR is associate professor of American studies at the University of North Carolina and author of The Cultural Roots of American Islamicism.