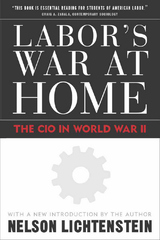 Labor's War at Home examines a critical period in American politics and labor history, beginning with the outbreak of war in Europe in 1939 through the wave of major industrial strikes that followed the war and accompanied the reconversion to a peacetime economy. Nelson Lichtenstein is concerned both with the internal organizations and social dynamics of the labor movement—especially the Congress of Industrial Organizations—and with the relationship between the CIO, as well as other bodies of organized labor, and the Roosevelt administration. He argues that tensions within the labor movement and within the ranks of American business profoundly affected government policy during the war and the nature of organized labor's political relations with Roosevelt and the Democratic Party. Moreover, the political arrangements worked out during the war established the foundations of social stability and labor politics that came to characterize the postwar world.
AUTHOR BIOGRAPHY
Nelson Lichtenstein is Professor of History at the University of California, Santa Barbara. He is the author of numerous books, including Walter Reuther: The Most Dangerous Man in Detroit and, most recently, State of the Union: A Century of American Labor.
REVIEWS
"An impressive work which offers a useful perspective on the origins of the crisis the labor movement faces."—The Nation


"[Lichtenstein's] research remains a significant contribution... for drawing attention to the critical importance of events that transpired for labor during what Eric Goldman thirty years ago labeled 'the crucial decade.'"—Walter Licht, Reviews in American History


"Lichtenstein has compiled a splendid, well-researched book, written in an engaging and confident style. He effectively analyzes the search for labor stability during the war and, most important, what the implications were for trades unionism in the United States after 1945."—The Economic History Review