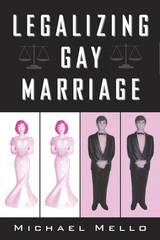 Every day seems to bring news of legal challenges to existing marriage laws and the constitutionality of any form of union for same-sex partners. In this timely and accessible book, Michael Mello argues that the public debates and political battles that have divided Vermont and Massachusetts will be repeated across the country as state after state confronts the issue of legalizing gay marriage.Michael Mello examines recent landmark decisions in state and federal high courts granting civil rights protections to homosexuals. In Vermont, the Supreme Court's recommendation that legislators recognize the "common humanity" that links all individuals irrespective of sexual identity and consider the question of same-sex marriage resulted in the first state legislation to establish civil union. In Massachusetts, the court's ruling that gay marriage is a right protected by the state constitution has plunged the legislature into a contentious debate about a constitutional amendment. In both states, as in California and New York, public discussion of equal civil protections for gays and lesbians soon become mired in contending views of morality, religion, social mores, and the sanctity of heterosexual marriage.Mello regards the widespread and virulent opposition to any form of same-sex unions as proof that in Vermont, as elsewhere, homosexuals are indeed a "despised minority" in need of the law's protection. Thus, civil union laws represent only a partial victory because they create a separate and inherently unequal category of relationships for gay people. Mello's analysis of the issues provides an invaluable guide to the battles being waged in state legislatures and by politicians at the national level.
AUTHOR BIOGRAPHY
Michael Mello is Professor of Law at Vermont Law School and the author of five books on capital punishment, including The Wrong Man: A True Story of Innocence on Death Row and Deathwork: Defending the Condemned.
REVIEWS
"As the debate over gay marriage is reigniting the culture wars, understanding the interaction between the courts and the legislatures in Vermont—the first state to recognize gay civil unions—is more important than ever. Drawing on newspaper reports, letters to the editor, legislative hearings, and polls, Michael Mello offers a richly detailed account of the political response to the Vermont Supreme Court's gay marriage decision. In the process, he casts new light on a debate that is now consuming America."—Jeffrey Rosen, author of The Unwanted Gaze and The Naked Crowd


"Mello's on-the-ground account of the political and social climate surrounding the Baker decision is thorough and compelling. He invites the reader into the daily media spin and focuses his lens on both the opinion of regular Vermonters and that of individual state legislators on the question of civil unions and marriage equality for same-sex couples."—Michael Adams, Director of Education and Public Affairs, Lambda Legal


"Mello's book on the struggle for civil unions in Vermont is a salvo in the gay marriage wars...his legal analysis is cogent."—The New York Law Journal