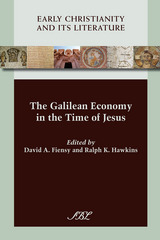 In order to provide an up-to-date report and analysis of the economic conditions of first-century C.E. Galilee, this collection surveys recent archaeological excavations (Sepphoris, Yodefat, Magdala, and Khirbet Qana) and reviews results from older excavations (Capernaum). It also offers both interpretation of the excavations for economic questions and lays out the parameters of the current debate on the standard of living of the ancient Galileans. The essays included, by archaeologists as well as biblical scholars, have been drawn from the perspective of archaeology or the social sciences. The volume thus represents a broad spectrum of views on this timely and often hotly debated issue. The contributors are Mordechai Aviam, David A. Fiensy, Ralph K. Hawkins, Sharon Lea Mattila, Tom McCollough, and Douglas Oakman.
AUTHOR BIOGRAPHY
David A. Fiensy is Professor of Biblical Studies at Kentucky Christian University and Associate Director of the Shikhin Excavation Project in (Galilee) Israel. He is the author of a number of books, including Social History of Palestine in the Herodian Period (Edwin Mellen Press), Message and Ministry of Jesus (University Press of America), and Jesus the Galilean (Gorgias). Ralph K. Hawkins is Associate Professor of Religious Studies at Averett University. His books include The Iron Age I Structure on Mt. Ebal: Excavation and Interpretation (Eisenbrauns) and How Israel became a People (Abingdon).
TABLE OF CONTENTS
Contents
Preface
Abbreviations
Introduction
People, Land, Economy, and Belief in First-Century Galilee and Its Origins: A Comprehensive Archaeological Synthesis
City and Village in Lower Galilee: The Import of the Archaeological Excavations at Sepphoris and Khirbet Qana (Cana) for Framing the Economic Context of Jesus
Revisiting Jesus’ Capernaum: A Village of Only Subsistence-Level Fishers and Farmers
Execrating? or Execrable Peasants!
Assessing the Economy of Galilee in the Late Second Temple Period: Five Considerations
Contributors
Ancient Sources Index
Modern Authors Index
Subject Index