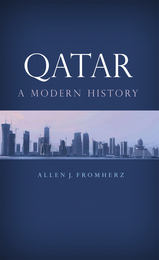 What role does Qatar play in the Middle East and how does it differ from the other Gulf states? How has the ruling Al-Thani family shaped Qatar from a traditional tribal society and British protectorate to a modern state? How has Qatar become an economic superpower with one of the highest per capita incomes in the world? What are the social, political, and economic consequences of Qatar’s extremely rapid development?

In this groundbreaking history of modern Qatar, Allen J. Fromherz presents a full portrait that analyzes Qatar's crucial role in the Middle East and its growing regional influence within a broader historical context. Drawing on original sources in Arabic, English, and French as well as his own fieldwork in the Middle East, the author deftly traces the influence of the Ottoman and British empires and Qatar’s Gulf neighbors on the country prior to Qatar’s meteoric rise in the post-independence era. Fromherz gives particular weight to the nation's economic and social history, from its modest origins in the pearling and fishing industries to the considerable economic clout it exerts today, a clout that comes with having the second-highest natural gas reserves in the region. He also looks at what the future holds for Qatar's economy as the country tries to diversify beyond oil and gas. Furthermore, the book examines the paradox of Qatar where monarchy, traditional tribal culture, and conservative Islamic values appear to coexist with ultra modern development and a large population of foreign workers who outnumber Qatari citizens.

This book is as unique as the country it documents—a multi-faceted picture of the political, cultural, religious, social, and economic make up of modern Qatar and its significance within the Gulf Cooperation Council and the wider region.

Allen J. Fromherz is an associate professor of history at Georgia State University. He is the author of The Almohads: The Rise of an Islamic Empire and Ibn Khaldun: Life and Times.

REVIEWS
-- Jill Crystal, professor of political science, Auburn University, and author of Oil and Politics in the Gulf: Rulers and Merchants of Kuwait and Qatar

2. Qatar -- Geography of a Near Frontier

3. The Origins of Qatar -- between 'Emergence' and 'Creation'

4. Creating Social Realities -- Qatar and the British in the Twentieth Century

5. Sheikh Khalifa and the Enigma of Independence

6. Sheikh Hamad and the Future of Qatar

8. The Emir and the Exercise of Authority in Qatar