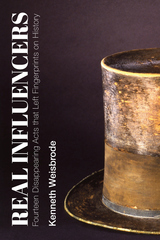 BUY FROM
Real Influencers: Fourteen Disappearing Acts that Left Fingerprints on History
by Kenneth Weisbrode
St. Augustine's Press, 2022
Paper: 978-1-58731-691-3
eISBN: 978-1-58731-692-0
What is influence and why might real influencers be those whose names we no longer remember? Ken Weisbrode embarks on an exploration to trace the most powerful strands of cultural and intellectual influence, and demonstrates it might not be what we think it is.

"The influencer is a person who made an art of absence in the trade of cultural and sometimes political capital. The ones in this book represent a range of vocations, from politics to diplomacy to novel-writing, but almost all were cultural entrepreneurs. They were not puppet masters, gray eminences, unsung heroes, or Svengalis––although one or two have been portrayed thus. Rather, their influence is spread by virtue of their willful disappearance, of its perpetuation of a new language and cultural standard, and of their many conscious and unconscious imitators. The reason they had such influence was precisely because a part of their method was to be less visible in order to watch their ideas, habits, and styles proliferate without their names necessarily being affixed. […] Yet, to understand such a modus operandi is necessary today when the proliferation of social media influencers are squandering cultural capital so quickly by the simultaneous promotion of their products, above all, themselves."
AUTHOR BIOGRAPHY
Kenneth Weisbrode is assistant professor of history at Bilkent University, Turkey. The author of The Year of Indecision, 1946 (2016) and Churchill and the King (2013), Weisbrode received his PhD from Harvard University.

TABLE OF CONTENTS
Contents
PREFACE
1. L’inspirateur
2. The Diplomat
3. The Cosmopolite
4. The Mole
5. The Reactionary
6. The Architect
7. The Vicar
8. The Sage
9. The Gambler
10: The Grammarian
11: The Protégé
12. A TALE OF THREE COLD WARRIORS
SOURCES AND ACKNOWLEDGMENTS