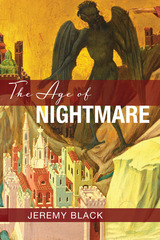 The Age of Nightmare
by Jeremy Black
St. Augustine's Press, 2022
eISBN: 978-1-58731-010-2
Cloth: 978-1-58731-008-9
Paper: 978-1-58731-009-6
Historian Jeremy Black is comprehensive, as ever, but in his treatment of the British Gothic novel his greatest service is the preservation of the detail––namely, the human impetus behind art that is often undervalued. Gothic novelists were purposeful, thoughtful, and engaged questions and feelings that ultimately shaped a century of culture. Black notes that the Gothic novel is also very much about "morality and deploying history accordingly." The true interest of the Gothic novel is more remarkable than it is grisly: the featured darkness and macabre are not meant to usurp heroism and purity, but will fall hard under the over-ruling hand of Providence and certainty of retribution.

Black's understanding of the Gothic writer is a remarkable contribution to the legacy of British literature and the novel at large. Once again, in Black thoroughness meets fidelity and the reader is overcome with his own insights into the period on the merit of Black's efforts.

In The Weight of Words Series, Black is devoted to the preservation of the memory of British literary genius, and in so doing he is carving out a niche for himself. As in the Gothic novel where landscapes give quarter to influences that seem to interact with the human fates that freely wander in, reading Black is an experience of suddenly finding oneself in possession of an education, and his allure takes a cue from the horrific Gothic tempt.
AUTHOR BIOGRAPHY
Jeremy Black is emeritus professor of history (University of Exeter) and prolific writer in the areas of eighteenth century British, European and American political, diplomatic and military history. He has recently turned his attention to the biography and historical commentary of prominent British literary figures. His recent titles include The Importance of Being Poirot (2021) and the forthcoming The Game Is Afoot: The Enduring World of Sherlock Holmes. He is also a senior fellow at the Center for the Study of America and the West at the Foreign Policy Research Institute (Philadelphia).