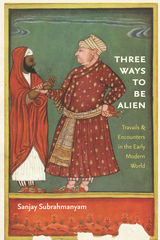 Sanjay Subrahmanyam’s Three Ways to Be Alien draws on the lives and writings of a trio of marginal and liminal figures cast adrift from their traditional moorings into an unknown world. The subjects include the aggrieved and lost Meale, a “Persian” prince of Bijapur (in central India, no less) held hostage by the Portuguese at Goa; English traveler and global schemer Anthony Sherley, whose writings reveal a surprisingly nimble understanding of realpolitik in the emerging world of the early seventeenth century; and Nicolò Manuzzi, an insightful Venetian chronicler of the Mughal Empire in the later seventeenth century who drifted between jobs with the Mughals and various foreign entrepôts, observing all but remaining the eternal outsider. In telling the fascinating story of floating identities in a changing world, Subrahmanyam also succeeds in injecting humanity into global history and proves that biography still plays an important role in contemporary historiography.
AUTHOR BIOGRAPHY
SANJAY SUBRAHMANYAM is the Navin & Pratima Doshi Chair of Indian History at UCLA. He is the author of numerous books, including The Career and Legend of Vasco da Gama.
TABLE OF CONTENTS


List of Illustrations • Foreword – David Shulman • Preface • Introduction: Three (and More) Ways to Be Alien • A Muslim Prince in Counter-Reformation Goa • The Perils of Realpolitik • Unmasking the Mughals • By Way of Conclusion • Notes • Index