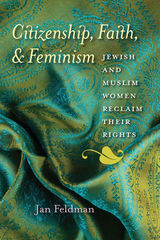 Religious women in liberal democracies are “dual citizens” because of their contrasting status as members of both a civic community (in which their gender has no impact on their constitutional guarantee of equal rights) and a traditional religious community (which distributes roles and power based on gender). This book shows how these “dual citizens”—Orthodox Jewish women in Israel, Muslim women in Kuwait, and women of both those faiths in the U.S.—have increasingly deployed their civic citizenship rights in attempts to reform and not destroy their religions. For them, neither “exit” nor acquiescence to traditional religious gender norms is an option. Instead, they use the narrative of civic citizenship combined with a more authentic, if alternative reading of their faith tradition to improve their status.
AUTHOR BIOGRAPHY
JAN FELDMAN is an associate professor of political science, specializing in political theory, at the University of Vermont. She is the author of Lubavitchers as Citizens: A Paradox of Liberal Democracy.
TABLE OF CONTENTS