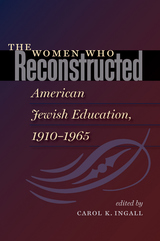 The conventional history of Jewish education in the United States focuses on the contributions of Samson Benderly and his male disciples. This volume tells a different story—the story of the women who either influenced or were influenced by Benderly or his closest friend, Mordecai Kaplan. Through ten portraits, the contributors illuminate the impact of these unheralded women who introduced American Jews to Hebraism and Zionism and laid the foundation for contemporary Jewish experiential education. Taken together, these ten portraits illuminate the important and hitherto unexamined contribution of women to the development of American Jewish education.
AUTHOR BIOGRAPHY
CAROL K. INGALL is the Dr. Bernard Heller Professor of Jewish Education at the Jewish Theological Seminary.
TABLE OF CONTENTS